For the last 10 years, the dedicated work of the Okeanos Foundation has fostered a renaissance in traditional Pacific boat construction, open ocean sailing and navigational training that has inspired innovative, culturally-based local solutions while supporting sustainable development and energy independence.

Throughout the Pacific, traditionally designed modernized fossil fuel-free sailing canoes or ‘vakas’ (also known as va’a, waka, walap, waa’) built by Okeanos Foundation for the Sea are fulfilling a variety of regional needs for transportation between the islands.

In 2017, Okeanos Foundation in partnership with the Permanent Mission of the Republic of Palau and GLISPA created a summer-long exhibit in the United Nations Visitors Lobby to usher in the first ever Oceans Conference, dedicated to the implementation of UN Sustainable Goal 14 (to conserve and sustainably use the oceans, seas and marine resources for sustainable development).

Okeanos’ Ocean Peoples exhibit featured the modern day  application of our traditional sailing canoes all throughout the Pacific – an exemplary model of how multiple SDGS can be met.

In 2012, Okeanos gifted four vakas from the Te Mana O Te Moana fleet to the voyaging societies of Fiji, Samoa, Cook Islands and Tahiti. The significant impact of the Okeanos-gifted vakas can be seen throughout the Pacific as iconic symbols of cultural pride and hope for the future, featured on agency and government issued currency, stamps, tourism and policy promotional materials.

An illustration of the the Uto-Ni-Yalo.

Okeanos Vakas on the cover of the Pacific Ocean Summit.

The Okeanos-gifted vaka Gaualofa of the Samoan Voyaging Society featured on the cover of SPREP’s Strategic Plan document.

Along with its Pan-Pacific vaka initiatives, Okeanos Foundation also advances environmental awareness through feature films like Racing Extinction and The Starchasers, ocean science symposia and vaka-based conservation events throughout the Pacific.

Images of endangered species, such as this young sea turtle, are projected on St. Peter’s Basilica in the Vatican.

Images of coral reefs projected on the facade of the United Nations Headquarters in New York. 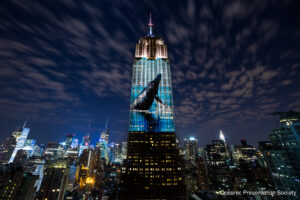 A humpback whale breaches on the side of the Empire State Building as projected in Racing Extinction.